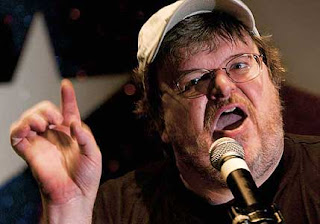 Capitalism: A Love Story
by Michael Moore
I saw this movie with a woman who did not normally read the business news, and her reaction was that Moore only showed negative consequences, he did not explain how things happened. I agree that Moore's intention was to incite class hatred, rather than to inform. It was two hours of non-stop vilification.

Moore went on and on about how little airline pilots are paid. The fact he quoted was that beginning pilots on American Eagle are paid $20K a year.

Lots of people want to be pilots, the pay if you're flying a large plane is reasonable to good, but you have to log a lot of hours to be qualified to do that. To get those hours, you have to work many years for practically nothing as a flight instructor or flying small planes, basically as an apprenticeship. Eventually an experienced captain of a jumbo jet will make over $200K. Moore doesn't talk about that -- the fact that he raves about the low pay of beginning pilots without mentioning the high pay of experienced pilots is such a grave omission that it's basically a lie, or at least a major distortion. Source on pilot's pay: http://www.fool.com/community/pod/2000/000522.htm

He spends 20-30 minutes on this one couple being evicted from a farm in the Midwest they'd lived on for 40 years. A few questions come to mind: if they'd been there for 40 years, why wasn't the farm paid off? Most mortgages are for 30 years. If they'd taken out huge equity loans on the farm, then it wasn't their farm any more, was it? Lots of people would like to live on a farm, but they have to live in apartments or trailers to make ends meet. If this couple was finding themselves strapped for cash, they should have sold the farm and moved into cheaper accommodations rather that just sitting there waiting to be foreclosed upon.

The movie covers the announcement by the Wayne County sheriff (Wayne County includes a major part of Detroit) that he would no longer evict anybody from houses that were being foreclosed upon. Michael Moore depicted the guy as a hero, a role model for other law enforcement officers to follow.

If no one could be evicted when foreclosed upon, no one would have any incentive to pay their mortgages. If I was a bank, I would take note of the sheriff's actions and stop making any home loans to anyone for a house in Wayne County. If the banks did this, which they should, it would become impossible for anyone in Wayne County to sell their house.

Banks don't foreclose upon people just to be mean. Foreclosure is a necessary part of the system. It is interesting that Moore puts no responsibility on all the people who borrowed money that they weren't going to be able to pay back.

The devastation of Michigan:

There was a feeling of deja vu for those of us who had seen "Roger & Me" as he spent a lot of time talking about how the Michigan auto industry was devastated. It never seems to occur to Moore that the reason Michigan's auto industry got so wiped out was that aggressive unions had undermined its global competitiveness.

Moore interviews a lot of clergy who tell us how profoundly "evil" capitalism is. Interestingly, he does not interview any Evangelicals, only Catholic priests.

I do not disagree, however, that Jesus had a negative attitude toward the wealthy. He lived centuries before anyone said anything intelligent about economics. He thought the end of world was going to happen in a very short time, so he was not the least bit concerned about productivity or job creation. Pretty much everything he said about economics was counterproductive. Catholics are more faithful to Jesus's messages about economics than Protestants, there was a re-thinking about the subject in the Protestant Reformation called the "Protestant Work Ethic" that reconsidered these values and resulted in a great increase in productivity in the Protestant countries.

Moore spends a lot of time interviewing some red-headed bearded guy who I didn't recognize and who I don't remember being introduced. He said that Wall street served no productive function, in fact their function was totally destructive. He said Obama's Treasury secretary Timothy Geithner had been a screw up in every job he'd had before nomination, and that Geithner's only qualification was a willingness to tell his bosses whatever they wanted to hear, however absurd. I was really wondering who this clown was, and what his qualifications were, other than a willingness to tell Moore whatever he wanted to hear, however absurd.

Having followed the business news, it was amazing to hear that Geithner was so unqualified. Wall Street was quite happy with him -- if Obama had picked someone unqualified for such an important position at such a crucial time, there would have been a lot of alarm about it in the marketplace and in the news.

Wall Street's function is not "totally destructive". It is where decisions are made about which companies are going to survive and which are going to fail.

Moore extensively vilifies Goldman-Sachs, and makes a big deal of the fact that Henry Paulson, Bush's Treasury Secretary, and many of his advisors, worked there. For one thing, Goldman-Sachs came through the housing bubble better than any of the other big banks and was the least in need of being bailed out. For another, there's nothing wrong with people who've worked in the private sector taking jobs in government.

Vikram Pandit, the CEO of Citigroup, was among the bankers vilified by this movie. Pandit did not assume control of Citigroup until AFTER his predecessors had made a mess of it, and he is currently being paid $1 a year in compensation.

Moore really goes out on a limb, saying there really was no financial emergency, there was no risk of the economy sliding into a depression, it was all a hoax concocted by Bush to justify the bailout and thereby steal taxpayer's dollars. This is totally disconnected from reality.

For one thing, much of the bailout money has been returned to the government at this point, so if it was theft, it wasn't a very effective way to steal. For another, the bailout was terrible news for the Republicans -- it all but guaranteed a victory for the Democrats in the elections, both presidential and congressional, whereas before it, McCain had a fighting chance. Most of the resistance to the bailout in congress came from Republicans. Moore interviews some female congresswoman, a blithering idiot, who said it was very "suspicious" that the whole thing happened so shortly before an election. I don't see how being before an election HELPED pass the bailout, when 90% of the phone calls congress was receiving about the measure were against it. The congressmen voted AGAINST what their constituents were overwhelmingly telling them to do. They did it because the alternative was to be eventually held responsible for disaster. When Fed chairman Ben Bernanke announced the need for the bailout to a bunch of congressmen, one of the first questions they asked was "Can't this wait until after the election?".

For that matter, if the bailout was an evil Republican plot, why did Obama vote for it?
Posted by Bill at 4:02 PM