Book Review: "The Conscience of a Liberal" by Paul Krugman 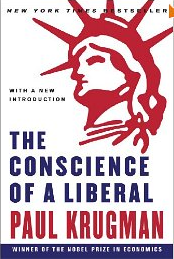 This book wasn't really what I expected. I expected Krugman to be trying to persuade me to become a liberal, while in fact he tends to assume I already am one and is mostly talking about tactics to achieve liberal goals. I also expected a lot of talk about poverty, and about liberal social issues. In fact neither of those things were discussed very much at all. What was discussed was mostly "inequality".

Apparently, while per-capita GDP has risen considerably since 1980, the median income, adjusted for inflation, has stayed roughly constant. The increase in wealth has been mostly concentrated among the rich. This offends Krugman, and most of the book is spent focusing on reducing "inequality".

On the topic of the median income not having risen, has the skill level of the median person increased? Krugman gives no information on this, and I am skeptical about whether it has. In my opinion, one of the biggest problems the economy faces is that so many people are arriving in the workforce without skills. Even people born with a silver spoon in their mouths and their college education paid for by their parents often major in something of no economic value, economically castrating themselves, and spend the rest of their lives complaining about how "unfair" capitalism is because they aren't paid better. People make these unfortunate choices partly because they often find economically rewarding topics less interesting or more difficult, and partly because we have an extremely popular counterculture that is doing everything it can to discourage economically rewarding activity, at least of the legal variety.

One point Krugman makes many times is that the Republicans benefited tremendously from race as an issue, and that race was the main reason Ronald Reagan got elected. I disagree that Republicans gained so much from race, it generally is a topic they're sick of hearing about, while liberals always want to go on and on about it. He makes no mention of a couple of issues Reagan benefited from: Carter's impotence in dealing with the Iranian hostage crisis, and the widespread perception that the UAW had destroyed the Michigan work ethic, and with it, the competitiveness of the US auto industry.

Another point Krugman made, briefly, is that the influx of unskilled illegal immigrants only decreases unskilled wages in the US by about 5%, which I find extremely difficult to believe.

So if we give Krugman what he wants, and divvy up the pie more in favor of those without skills, we will reduce the incentives to get skills and thus have fewer skilled people contributing to the economy, and lower productivity as a result. But Krugman, in the whole book, which was almost entirely about economics, never expresses any concern about productivity. In his mind, wealth is not something you create, it's something you take from the rich.

I am no fan of the Republican party, but Krugman really despises and vilifies them to an extreme level.

Krugman gives a history of the 20th century, slanted from his own point of view, but interesting, nonetheless. He mentions that while the top bracket marginal tax rate is currently about 40%, after WWII it was about 70% and in the fifties it was about 90%. I don't personally understand why so many Americans are so upset about how high taxes currently are. About the only major policy position McCain was offering during his bid for the presidency was a tax cut for the rich, and until the financial crisis, he was neck and neck with Obama, though Obama was better financed.

It's not surprising that Krugman is a fan of labor unions, but it's interesting that one of the reasons he supports them so much is that they provide an opportunity to indoctrinate workers to vote for liberal politics. Of course, as I've said, their negative impact on productivity doesn't bother him a bit. Krugman is convinced that only CEO's and the rich are against unions, he seems totally unaware of the fact that they are unpopular with many common people as well. He bitterly mentions Reagan's firing of the illegally striking air traffic controllers in 1981, but fails to mention the fact that it was met with widespread public approval.

There is a chapter about health care reform, which is quite sensible.

Krugman never mentions religion as a political issue, nor does he mention social issues the Republicans have gained from, such as fighting abortion and banning gay marriage. Thomas Frank, who I think is more liberal than Krugman, in his "What's the Matter with Kansas?", discusses how these issues took the spotlight away from the economic issues that he, like Krugman, would like people to focus on.