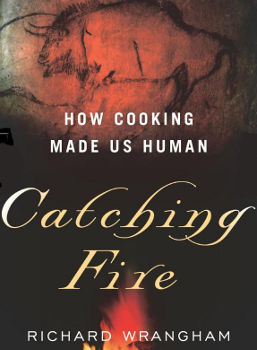 
Digesting raw food takes a lot of energy. Cooking food makes digesting easier frees up a lot of energy for other uses, such as larger brains.
Cooking could also help drive the evolution of larger brains. Keeping a fire going and not being injured by it is not easy, especially for a hominid with brains much smaller than ours. It was high tech for the time. Hominids with larger brains would have been more able to pull it off. As has been said, as we evolved more dependency upon fire, losing it would have been a major threat to a tribe's survival.
The author talks about human pair bonding being primarily oriented toward division of labor. A hunter could go out and cover a much larger radius if he could be confident a cooked meal was waiting for him when he got home.
He argues that a human man-wife team was more oriented toward division of labor and having one party be able to stay at the camp and cook while the other hunted, than reproduction. He cites, as evidence, a modern primitive tribe (one tribe) where the wives sleep around with their husbands' knowledge. The husbands don't like this, but put up with it. I really had trouble buying this, and I think it is more easily explained by bad anthropology by whoever studied that one tribe than anything else. He also didn't elaborate on how willing these husbands who had been blatantly cheated on were to make sacrifices for the well-being of the children of such unions.
Posted by Bill at 4:34 PM